So what exactly is quadratic funding all about? How can it magnify the funding of public goods? And what are public goods in the first place? You’ll find answers to these questions in this article.

You can also consider supporting us on Gitcoin, which leverages the power of  quadratic funding described in this article, more on our grant later.

Quadratic Funding is the mathematically optimal way to fund public goods in a democratic community where the number of contributors matters more than the actual amount funded.

Let’s start with what public goods actually are.

In economics, a public good is a good that is both non-excludable and non-rivalrous, so individuals cannot be excluded from use, and use by one individual does not reduce availability to others. A public good can also be used simultaneously by more than one person.

To illustrate the difference between public goods and other goods such as common, private or club goods, let’s have a look at a few examples.

All goods can be classified by their excludability and by their rivalry.

Okay, so let’s start with excludable and rivalrous goods. This intersection represents private goods such as food, clothes, cars and other consumer goods. Bread, for example, is a scarce resource which can cause people to compete for it. A person will be excluded from obtaining bread if they are not willing to pay for it.

When it comes to goods that are excludable and non-rivalrous, we end up with club goods such as cinemas, private parks or satellite tv. Another example is a noncongested toll road which excludes people who don’t want to pay for it, but it’s not a rival good since one person’s use of the road does not reduce its usefulness for the others.

So how about non-excludable goods that are rivalrous in nature? This intersection represents common goods such as fish, timber or coal. Everyone has access to these resources but there is an inherent competition when it comes to collecting them due to potential overuse or congestion.

Now for the non-excludable and non-rivalrous goods. This is where public goods come into play. Some of the examples are clean air, infrastructure and privacy. We don’t have to compete for them and we cannot be excluded from them, either by being priced out or not belonging to a specific group of people.

Quadratic funding is a concept that extends ideas from quadratic voting to a funding mechanism. Both concepts were widely discussed by Vitalik Buterin in his blog posts and a paper that he co-authored together with Zoë Hitzig and Glen Weyl.

At the core of Quadratic funding is its matching pool.

The funds collected in the matching pool are used to magnify the individual contributions to different projects.

To understand the concept of quadratic funding better, let’s go through a quick example.

Imagine that we have $10,000 in a matching pool that was provided by our matching partners and we have 3 projects participating in a funding round.

Let’s have a look at the matched amounts to see the power of quadratic funding.

Matched amounts are calculated by using the quadratic funding formula where the amount received by the project is proportional to the square of the sum of the square roots of contributions received.

The first project got an additional $1851.85 which is an extra ~185% on top of the contributed amount. Project B received only a match of $740.74 which is around 74% of the total contributions. Now here comes the magic, Project C received a whopping $7407.41 of matched funding, which is 740% of the initial amount contributed.

Of course, in the real world scenario, a project would most likely receive multiple different contributions with different amounts, for example, $1, $5, $20 etc, but the principle stays the same – more contributions = higher the matched amount.

Quadratic funding also creates amazing incentives for smaller contributors over the bigger ones a.k.a whales. An individual supporting a project would see diminishing returns on bigger contributions, with the small contributions getting the highest matches percentage-wise.

As an example, imagine that our project C received its next contribution.

If the 21st supporter contributes another:

As we mentioned earlier, this model creates really strong incentives for individuals to contribute even small amounts. If you want to see how matching works for a different number of projects, different matching amounts and different amounts contributed, you can play with a calculator here.

Speaking about small amounts, if you’d like to support this channel and free DeFi education check out our Grant on Gitcoin. On the Grant Page you can learn more about how this channel started, our goals and a few ideas for the contributed funds. At the time of writing this article, a $1 contribution would result in 12 extra dollars from the matching pool.

Interacting with Gitcoin is as easy as using Uniswap. You can connect your wallet, choose grants that you want to support and contribute ETH or any ERC-20 token such as DAI or USDT.

You can find a link to our grant here.

Quadratic funding, although quite a new concept, is already making a big change. There’s been over $2M distributed to public goods.

There is a growing number of projects that make quadratic funding possible such as Gitcoin Grants, Downtown Stimulus and clr.fund, with Gitcoin Grants leading the charge.

If you’re interested in supporting public goods make sure to visit their websites and also remember that in quadratic funding, every contribution matters – even the smallest amounts!

So what do you think about quadratic funding? Do you think it will be a default method for funding public goods in the future? 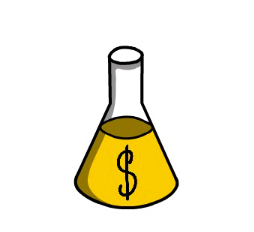